Ekphrasis – description of a work of visual art used as a literary device.

Once dubbed ‘the gallery that loves poetry’, from the beginningTerre Verte has taken an active interest in collaborations between writers and artists . So it makes sense to explore some online ekphrasis, opportunities for writers to use a Terre Verte artwork as a starting point for a poem or prose. We’ll start here with some responses to a group of paintings by Imogen Rigden, work she has done with the evocation of a story clearly in mind……and we’ll see where it goes. If you might be interested in being sent an image as a writing prompt, please email and ask.

I’m in trouble. The gods I consulted
have answered my dreams,
not my prayers.

Arriving after dark, they deliberately ignored
pleas for my daughter’s reprieve
and an easy demise for myself,

and entered instead my nightmare
of forever wading through mud,
the light of the lachan

out of reach, amen amen amen.
Until I remember the sky
is simply there.

This poem was written in response to a painting by Imogen Rigden. Mary J Oliver is an artist, poet and writer. Her first book ‘Jim Neat: The Case of a Young Man Down on His Luck’ was published by Seren in 2019

Lochan - a painting by Imogen Rigden 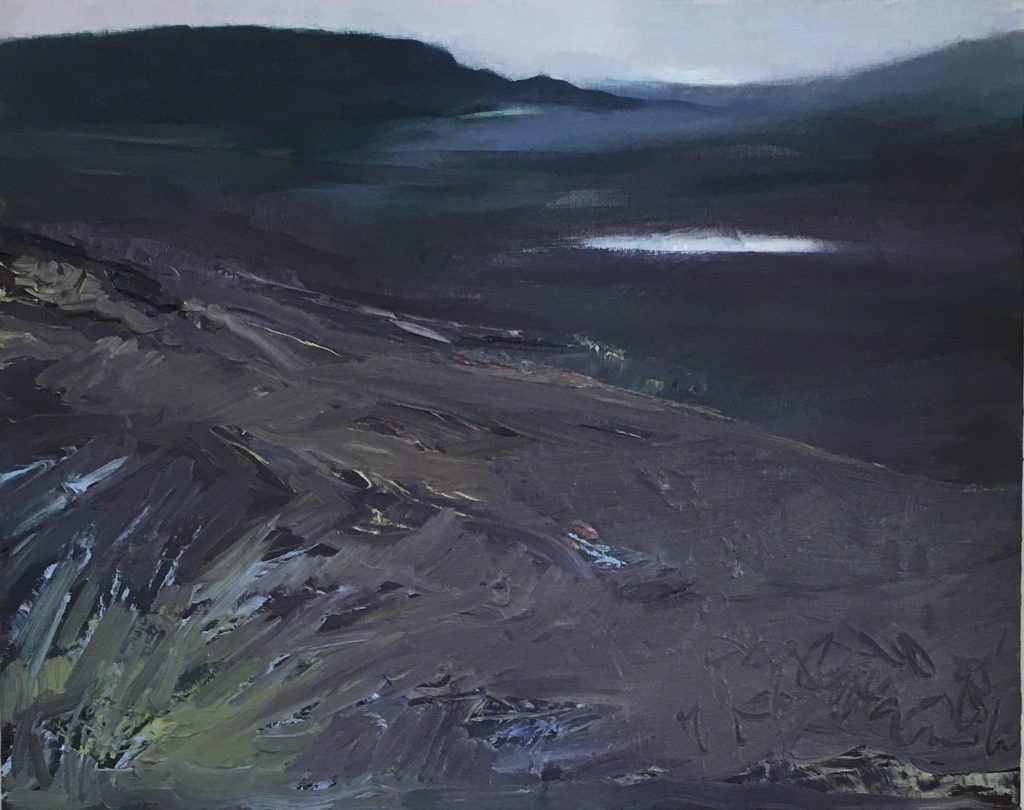 THE MOON AND THE ICE HILL

You’re always there, blank faced, cooling down the colours of the world. Still shaping dreams where, like Selene, I’d give you fifty daughters.

I’ve moved through denial, skulked under that lilac blanket – the final tinge of sunlight – and pretended that it was my choice to move out, move on.

And anger. A surge of turquoise blue, like the flames of my grandmother’s gas ring. Less treacherous, of course, than the unlit fumes; the ‘nothing-to-show-here’ which saturated her blood when the bleeding stopped. She survived and later, when she talked about it, said it was the change that sent her mad. She’d had her babies though, so what the fuck!?

And bargaining: the lemon yellow what ifs and a flash of cadmium orange, those if onlys just as toxic. What if you’d never woken up in the early hours of that morning, told me you’d dreamt of a child – toddling across the hillside – and you wanted it, more than you wanted me? If only I’d been younger when we met, or I’d stopped taking the pill that first year, even though you said that you weren’t sure.

Then depression. For months, years actually, I wallowed in heavy, murky greens: work, friends, food, booze, everything thick with effort and stinking of loss. Sometimes I felt things acutely, a song lyric or your name mentioned in passing and linked with hers and then theirs. Cobalt green applied with a knife. When the friend, colleague (my mother even!) realised, they’d try to scrape away the damage. ‘Maybe it wasn’t him, can’t have been, he’d have aged a bit more by now, surely…’ But pigments produced at high temperatures, are very hard to shift.

And so eventually, I’m told, there’s acceptance. I’ve got nieces, nephews, godchildren and now an intern, such a bright, sweet girl. She looks like me and when I took her out to lunch there was a moment when the waiter called me ‘mama’ and it’s fair to say I glowed. So yes, maybe light is still light, even when reflected off barren rocks.

But now, alone at the end of another sculpted, sunken day, I know that lunar rays won’t ever melt the ice around my heart.

This piece was written in response to a painting by Imogen Rigden. Clare Owen is a writer and performer living in Cornwall. Her YA novel ‘Zed and the Cormorants’ was published by Arachne Press in April 2021.

The Moon and the Ice Hill - a painting by Imogen Rigden

A long tree-line on the horizon,
blue at dusk, and an orange eye
disappears from view seeing all
that is hidden beyond wind, storm –
fallen walls.

Do not trust
everything unseen is fixed, certain
as seasons, as fruit sugared and stored.
When the horizon shifts to silhouette, rock
to castle,

otter to woman, hooves to man
and starlings are sleeted in flame, streams flood
story to the mouth. In childhood the horizon
held wonder. Now it holds me in place, tastes
of dust.

This piece was written in response to a painting by Imogen Rigden. Cathy Galvin is a poet,  journalist and literature entrepreneur. She has published three pamphlets of poetry, most recently ‘Walking The Coventry Ring Road with Lady Godiva’ by Guillemot Press. 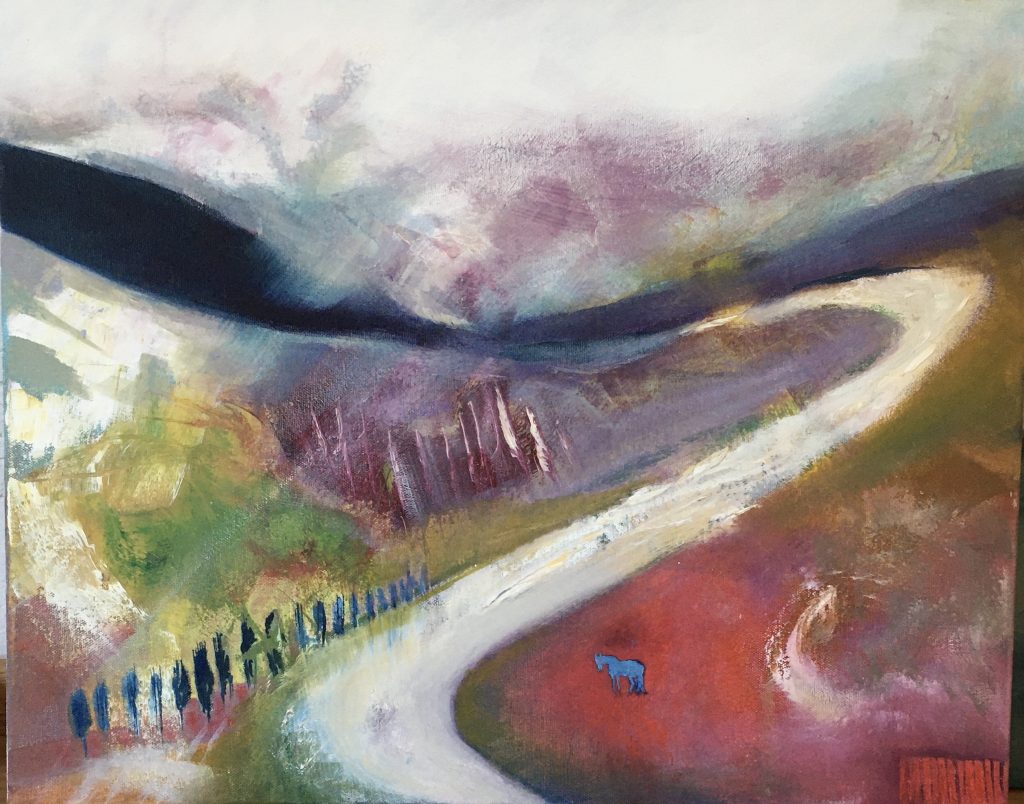